In Walenstadt, Switzerland, on October 16, 2017, a rockfall barrier from the Swiss company Geobrugg, stops the impact energy of 10,000 kilojoules - a new world record! A protective system which can stop such high forces has never before been tested live.

In the afternoon of October 16th, a 25-ton concrete block is thrown onto a rockfall protection barrier at the Geobrugg test site. The 30-meter-long and 7-meter-high net is installed vertically on a rock wall. The block with the weight of a heavy truck is released at a height of 42 meters and accelerates to 103 km/h. With a loud crash, it falls into the center of the net, which successfully stops the impact. This represents a world record. The magic mark of 10,000 kilojoules of impact energy in rockfall protection has been broken. Thus, Geobrugg's engineers have set a milestone in the mitigation of natural hazards.

Lightweight system with low cost
This new development is particularly interesting because a barrier of this magnitude can replace conventional dams, such as those built, for example, in the vicinity of traffic routes. These systems made of steel wire nets. They are relatively light and cost only a fraction of the investment and installation costs in comparison to dams, where huge amounts of soil have to be moved.

Global warming requires protective measures
The record has a serious background: global warming is leading to an increase in heavy rainfall and destabilization of thawing permafrost subsoils. Settlements and traffic routes in exposed areas are increasingly at risk. The catastrophic floods in South America and landslides in Switzerland this year are a dramatic illustration of this. More and more extensive safety measures are needed.

-    In 2011, Geobrugg already set a world record for the energy retention capacity of 8,000 kilojoules.

-    The rockfall protection barrier consists of several elements: In addition to the netting made of high-strength steel wire (1770 N/mm²), there are posts, ropes and U-brakes.

-    The test took place as part of the GEO-Summit 2017 - a conference on the topic of natural hazard protection with 400 participants from more than 40 countries. 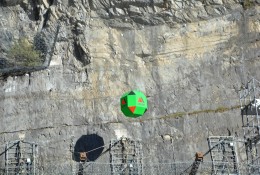 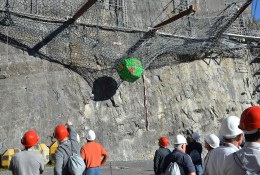 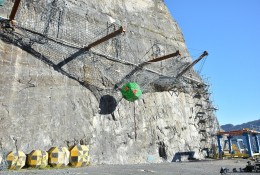 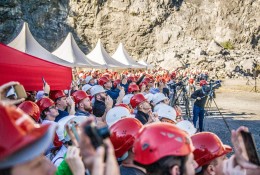 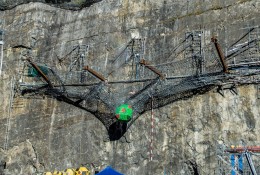 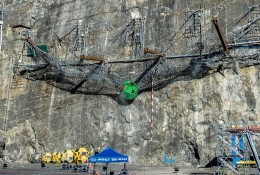