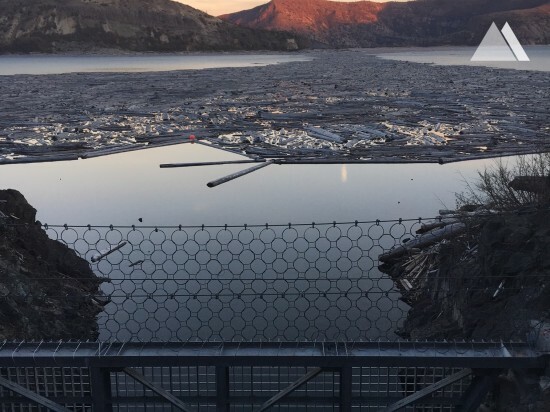 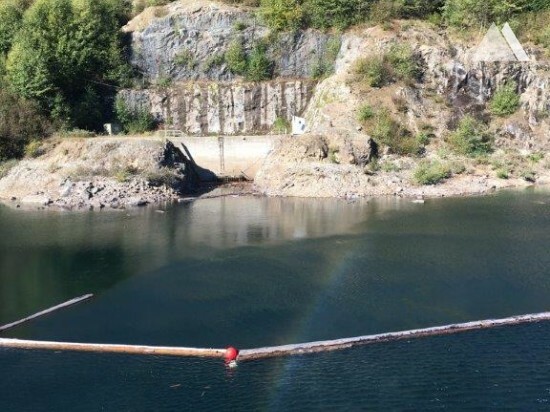 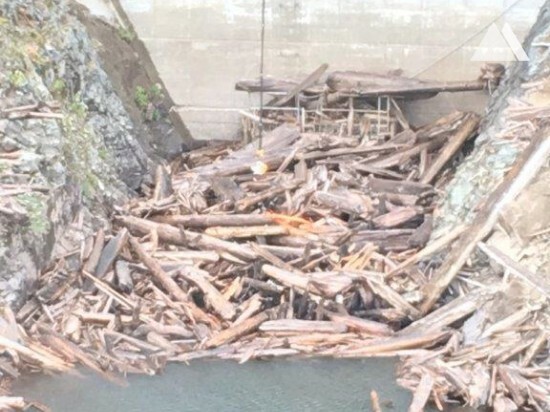 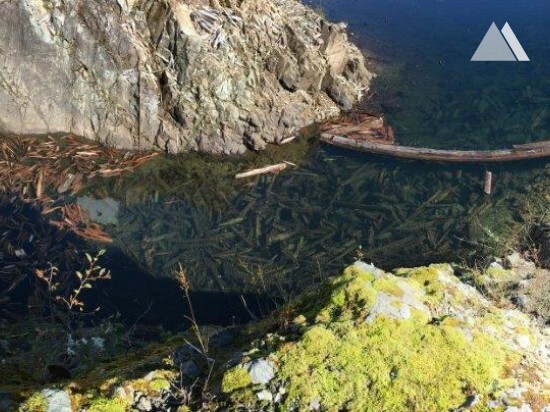 Spirit Lake is a lake north of Mount St. Helens in Washington State. The lake was a popular tourist destination for many years until the 1980 eruption of Mount St. Helens. Prior to 1980, Spirit Lake consisted of two arms that occupied what had been the valleys of the North Fork Toutle River and a tributary. About 4,000 years ago, these valleys were blocked by lahars and pyroclastic flow deposits from Mount St. Helens to form the pre-1980 Spirit Lake.  (Wikipedia, 11/2017).

During the 1980 eruption of Mount St. Helens, Spirit Lake received the full impact of the lateral blast from the volcano. The eruption tore thousands of trees from the surrounding hillsides and swept them into Spirit Lake. These thousands of shattered trees formed a floating log raft on the lake surface that covered about 40 % of the lake’s surface after the eruption. (Wikipedia, 11/2017).

The water level of Spirit Lake is maintained at about 3,406 ft (1,040 m) by draining water through a gravity-feed tunnel completed in 1985. Had the lake level not been stabilized, the dam, which was composed of volcanic avalanche debris created by the 1980 eruption, would have been breached and caused catastrophic flooding within the Toutle River Valley.  (Wikipedia, 11/2017).

The Spirit Lake Outlet Tunnel Intake Channel was improved and updated with a new log barrier. The purpose of the barrier is to protect and prevent clogging of the inlet structure, used to regulate the height of the lake, from floating wood debris (timbers, etc.). The timbers, which are very abundant above and below the surface of the water, constantly move by wind action and cannot be permanently
removed from the lake because the area is designated as a National Volcanic Monument (Project RFP).

The new log barriers consist of a rigid steel debris barrier from elevation and a flexible ring net barrier installed on top for increased capacity. The existing intake channel is a 40 feet deep rock channel which is approximately 16 feet wide at the bottom. The sides of the channel are roughly at a 2V to 1H slope up the height of the channel. The barrier system is situated in the lower 30’ feet of the channel. The log barrier will be a tiered system consisting of two parts:

1) The lower 20 feet is a rigid steel frame barrier.
2) The upper 10 feet of the barrier is a Ring Net Barrier System designed by Kane Geoetch, Inc. and supplied Geobrugg North America, LLC.